If it's not comics, tv, or movies, this is the place! Talk about anything and everything else right here!
Post Reply
9 posts • Page 1 of 1

On 16 May, 20 years ago, a great man had passed away. His name, Jim Henson. Without his imagination and hard work, there wouldn't be such remarkable creations as The Muppets, Sesame Street, Fraggle Rock, The Dark Crystal, Labyrinth and much, much more.

So to make a little tribute to this amazing man, post your favourite youtube clips of anything concerning Jim Henson.

To start if off, I'm posting Jim Henson's Memorial:

I totally remember that day, and I remember watching Leonard Maltin's tribute and bawling.

I had this issue of Life magazine for a long, long time. 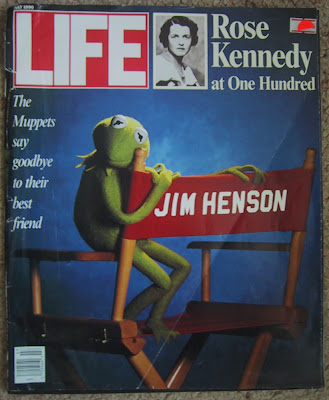 Seeing The Muppet Movie is one of my earliest childhood memories, and everybody knows The Rainbow Connection.

I love Jim Henson's work. I have a book of quotes by him, and they're all the most intriguing, heart felt quotes I could imagine.

Some of my favorite Muppet Memories are from Fraggle Rock, which I have recently started re-watching and there are not quite as many holes in it as you would think, revisiting the show so many years later. It was definitely aimed for kids, but it has some pretty adult feelings of exploration, new ideas, accepting new places and new things, and people being different.

The 40th Anniversary for "Sesame Street" was not too long ago, and the Newsweek issue pretty clearly stated that mostly, had it not been for that program, my generation and a couple of the ones before us, would never have had the ideals we have or the concepts we work with today. "Sesame Street" was the first show of its kind to really go beyond just being simple for kids, but attempted to teach them basic spelling, music, and math skills at such a young age. This program has literally seeped into almost every other pop-culture facet in American Culture. And it deserves that much, because it is a fantastic show.

There are only so many things you can say about the guy without sounding redundant or idol-worshiping, but to summarize my perspective of the Late-Great-Great-Man Jim Henson....

the man was a fucking genius who literally was just making puppets and talking to kids with them... because kids were more fun. What a great way to live your life.

oh wow, has it really been that long? I remember feeling really sad and surprised that he'd passed away, and so young too.

Its funny the people and things that you think would be around forever...

Ahhh! its Elmo! and Fozzy and Gonzo! *poings*

Wait ... you mean .... Kermit and Miss Piggy and Gonzo were not REAL PEOPLE? {sits down, fans self}

I highly recommend watching A&E's "Biography" espisode of Sesame Street. Fascinating and touching and hilarious.
"Humanity is a parade of fools, and I am at the front of it, twirling a baton." From Chapter 9 of _Brother Odd_ by Dean Koontz / from Chapter 10: "Life you can evade; death you cannot."

I think i remember that Hurricane Ep of Sesame Street, thing is it aired shortly after the September 11 attacks, and i couldn't help but think that this was a good way for them to deal with something that represented so much fear and upheval for adults that younger children may not understand, and i was so impressed that they got it out so quickly!
meddle not in the affairs of ficcers for you are malleable and easily .... O_o *stares* ooh is that a cookie?

So in lieu of the recent news of The Muppets movie announcement and the dropped hint from Jason Segel that there will be two new Muppet TV shows coming to Disney next year, one for kids one for family, (See the interview with Craig Ferguson, can't find the youtube link -- SORRY! >_< )

I have decided to post this after having stumbled upon it.

is the true story of Kevin Clash, the young boy who dreamed of becoming a Muppet puppeteer.

And then earned his place in the history books for children everywhere.

The character Elmo, be it the annoying giggly toy or the cute, little, red, toddler-esque muppet himself, is the perfect embodiment of love and curiosity and this film looks like it's going to capture the traits that make a wonderful person into the creator of a wonderful character, much like Jim was for Kermit (and so many others).

Anyways -- I'm a huge Muppet fan. Who else is psyched for this new movie coming up?
R.I.P. Ultimate Peter Parker

Incidentally I found this surfing a little while ago, i love this guys comic "Max Overacts" and the humor and affection of "Muppet Thor" (yes you read that right

Here 'tis the linky:
http://occasionalcomics.com/muppet-thor/
meddle not in the affairs of ficcers for you are malleable and easily .... O_o *stares* ooh is that a cookie?

Muppet Thor... just wow...
For funny tweets from NIGHTCRAWLER, follow my humor account http://www.twitter.com/fuzzybluejerk and spread it around to your comic friends!
Top
Post Reply
9 posts • Page 1 of 1