The place to go for debate on politics, religion, sex, and other tasty topics!
Post Reply
14 posts • Page 1 of 1

Wonder where this will go?

I hope it goes well for them.
"... Pirates just kidnapped the bride and everyone is laughing. God I wish I spoke Finnish."

You know it. xx
"I've met dozens like you. Skipped off home early, minor graft jobs here and there. Spent some time in lock-up too, I'll warrant; but less than you claim. And now you're, what, a petty theif with delusions of standing? Sad little king of a sad little hill..." - River Tam, 'Firefly'

I hope it goes well and any transition goes smoothly. However, the one downside is that the more often ignored parft of "Don't ask, don't tell," will also be repealed.

What will happen then if military officers violate the "Don't ask" part and take it upon themselves to inquire about someone's sexual orientation?
Meddle not with the heartstrings of fans, for we are powerful and hold your pursestrings.

Just because it may be legal (in the future) doesn't mean those individuals won't be faced with harsh discrimination. Having not been in the military I don't know for sure, but I can imagine what could happen to people who come out.

Note I am not advocating this. I am speculating future law suits.
Paige

Also, if "Don't ask, don't tell" is repealed, another law will have to be put in place to repeal the ban on gays in the military, in which Don't Ask, Don't Tell served as a loophole. As a lot of my friends in the service are pointing out, it's a bit early for gay rights activists and others who think the military service should be open to all who are willing and able to serve to celebrate. There's still a lot of work to be done, and the judge that issued the injunction on Don't Ask, Don't Tell acted rashly, not knowing the potential for that injunction to actually set things back for gays and lesbians in the service.

If the original ban on gays in the military is repealed first, Don't Ask, Don't Tell won't even be necessary except in the spirit of, "If it doesn't hurt the troops, we should mind our own business."
Meddle not with the heartstrings of fans, for we are powerful and hold your pursestrings.

There was no explicit ban on gay people or homosexuals to speak of. It was just an implemented unofficial policy, hence the term "Don't Ask/Don't Tell".

I understand it was repealed but I honestly think one of the most important things Barack Obama can do during his presidency is to make sure this goes through. The generations coming up into politics are already well aware of the necessity of tolerance and acceptance of homosexuality and it's unethical to continue limiting their rights, especially if they're throwing on fatigues and fighting or dying for our country.

is just unacceptable and crushes any kind of intellectual progress this country should be making. We're a great country, we shouldn't be hindered in such away by illogical and ill-founded fears. 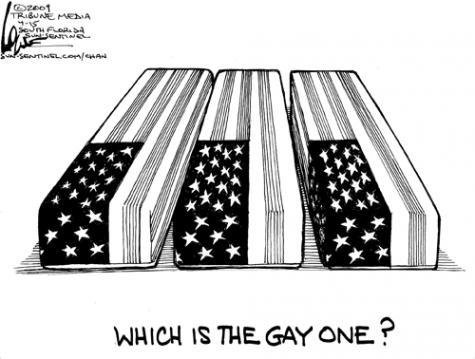 I had a friend who was dating a serviceman for years. And DADT made their relationship very difficult. In an age where personal information is at the click of a mouse, they had to hide to preserve his position. Nothing could go on Facebook, they couldn't let any friends even put up pictures of them together. There would be service events that significant others were invited to, but my friend wasn't allowed to attend. It was unfair, and it took tremendous tolls on their relationship.

DADT and everything like it is about one thing: Making gays second class citizens and creating inequality. I don't care what my soldiers are screwing in the meantime, as long as their soldiering. And that's all that should matter.
"If you live your life to please everyone else, you will continue to feel frustrated and powerless. This is because what others want may not be good for you. You are not being mean when you say NO to unreasonable demands or when you express your ideas, feelings, and opinions, even if they differ from those of others.â€
Top

I had to sign my contract as a reserve officer four times because of don't ask don't tell.

I signed my original contract which had almost a whole page outlining what not asking and not telling entailed. A few weeks later I was called back, that contract was ripped up and I signed a new one without that section. Then there was a delay in passing it and I had to return to sign a copy of my old contract again (but it had a section about how this don't ask don't tell policy might change in time).

About a month later I signed my current contract, again without the don't ask don't tell stuff plus new language about the military as accepting and respecting all soldiers equally.

When I do drill weekends, we have to take classes about it.

So Don't Ask Don't Tell is officially gone, and now we have a new problem...

Political candidates on the Presidential Ticket who seem to think this was a bad idea.


But that isn't even what got me fired up this morning. It was, in fact, the booing of a U.S. soldier in Iraq for stating his sexuality, publicly at a forum-debate in Florida. To me? This is deplorable.

For the full story check this out here.

It's so unfortunate that this is where our country is right now. No wonder so many countries think we're rude/awful people. We're so intolerant...

Here's the important chunk of the story:

Hill, wearing a gray "ARMY" t-shirt then appeared on-screen and told the candidates that he is gay and that he had been forced to lie about his identity when he was deployed to Iraq in 2010 because he didn't want to lose his job. He then asked if the candidates would "do anything to circumvent the progress that's been made for gay and lesbian soldiers" now that the Don't Ask, Don't Tell policy has been officially repealed.

His video then ended and ... a handful of very loud boos erupted in the debate hall. Otherwise there was silence -- not one cheer for an active duty soldier asking the candidates if they'd let him continue serving his country without lying. No other voter-submitted question all night elicited such a harsh response.

The question went to Rick Santorum, who made things worse by not offering any words of appreciation for Hill's service, which he didn't even acknowledge. Instead, he declared that "any type of sexual activity has absolutely no place in the military," that gays and lesbians have been given "a special privilege" by the repeal of DADT, and that the basic function of the military has been undermined because of it. Unlike Hill's question, Santorum's response produced loud applause and cheers that almost drowned him out as he finished speaking.

Check out the Video here.

Well, they're no different than any other politicians, supporting the troops only when it suits their agenda and leaving them high and dry or even stabbing them in the back otherwise. This time, though, they were honest and open about it.
Meddle not with the heartstrings of fans, for we are powerful and hold your pursestrings.


For more examples of how ignorant and offensive Rick Perry can be, see this Blog here.
R.I.P. Ultimate Peter Parker

Return to “The Danger Room”