Darkholme (Darkhölme? The spelling never was consistent.) as leader could be interesting. There's some speculation that the Punisher will be joining X-Force because his title is ending for him to join a team, and some seem to think that this one is the best fit for him if he's joining an existing team. Of course, I could've sworn I read that there will be three new members. We shall see.
Top

Whatever happens, I will continue to get this title so long as Remender stays on. Great storytelling. Humor. Character development.

And yeah, They are going to save Psylocke at the last possible moment, but I don't think she will stay with the team. Punisher would be a great choice, but who else? Not many characters in the Marvel Universe are that gritty...
For funny tweets from NIGHTCRAWLER, follow my humor account http://www.twitter.com/fuzzybluejerk and spread it around to your comic friends!
Top

I was under the impression that X-Force would only be 30 issues long though, ending when Marvel NOW starts...?
Top

Dazy wrote:I was under the impression that X-Force would only be 30 issues long though, ending when Marvel NOW starts...?

"The story up until issue 35 is locked in." - Remender in late July
He confirms in the second interview that UXF is not ending.
Top

That's a relief. I don't really want this title to go anywhere. It's got a lot of potential, even under format changes, character line-up changes, to continue being really great. Especially under Remender's pen.
Top

So while Remender seems to have pretty much settled the issue, especially when you see his Twitter account (which is a picture of AoA Nightcrawler for an avatar from a supposed upcoming cover), I'm even happier to see this news:

Which is sorta odd, honestly being I thought Vol. 5 (the rightful transition from XF to UXF) was a bit... flat. And mundane. And bad art. All around terrible run, LOL!
Top

Sneaky: "In an interview with CBR, Remender revealed that due to his increasingly busy schedule he's departing the book with December's issue #35, which is the close of the current "Final Execution" storyline and referred to in the introduction of the article as the "series finale." Yet Remender states that, "There are huge things coming in the world of X-Force that I can't go into, but I am not writing them. Some incredibly talented, really smart guys are coming in to pick up this corner of the Marvel Universe."
http://www.newsarama.com/comics/rick-re ... force.html
Top

We'll see where it goes, and if yet another version of Nightcrawler is going to be killed off to further Wolverine's character development. A new creative team may well mean a new cast line-up.
Top

I hope AoA is here to stay. The Darkholme-Wolverine dynamic hasn't been developed enough for my taste.

Also, so I understand right, the title itself is not ending... just Remender's run on it? Because I really like his stuff... I don't wanna see him go. I just hope whoever takes the helm can fit in the big boots Remender is leaving behind.
For funny tweets from NIGHTCRAWLER, follow my humor account http://www.twitter.com/fuzzybluejerk and spread it around to your comic friends!
Top

It's somewhat unclear, but I suspect it's getting the relaunch treatment. Most titles seem to be going that way; although, a couple where it might actually make sense due to protagonist changes are not. Regardless, there's speculation that the "Killers" teaser might be for X-Force.
Top

What is this Killers teaser you speak of?

And yeah, for the sake of having Darkholme around I hope it stays. But then again, if they can evolve the character past murderous revenge, he might have a shot of existing within another title. (New New Excalibur anyone!? Huh? Eh?! *prods with elbow*)
Top

Supposedly, Marvel has implied that it is related to the "Wanted" teaser. It looks just like this one but with the other word and the creative team of Hopeless and Larroca.
Top

Uncanny X-Force ends at 35, but will also get the renumbered treatment, and a new team.
I don't know what they're going to do with Darkholme. I suspect he's either going to die or go back to AoA, since I haven't heard anything about where he's going to go.
Top

It seems pretty lame to kill another Nightcrawler off so soon, but we'll see. He's definitely not in either line-up for the two X-Force books.

Rather than death or comic limbo, I'd rather see them maybe make him join the Brotherhood with Mystique. *ducks flying objects* I have my reasons.

1. The options for him seem to have narrowed down to death, limbo or villainy.
2. Judging by Brevoort's comments when asked, as well as various other editors, Marvel has no intention of bringing back the original any time soon, instead he and the real Jean are being joined by Xavier.
3. For people who still view or worry Darkholme is blocking the original's return, having him in the Brotherhood would nix that idea. It would have no more impact on the original than Dark Beast had on Beast, and they co-existed for what, 17-ish years in the 616 universe?
4. We could finally see a version of Kurt interacting with Mystique, rather than Mystique continuing to obsess over Rogue.
5. And mostly because it makes sense in his character progression. This is someone who has lost everything dear to him, even including his world. Makes sense for him to be drawn to someone he was shown as being very close to in his own world, especially since the two Mystiques aren't portrayed as that different when it comes down to it. The main difference was that AoA Mystique showered love and a type of twisted devotion on Kurt, whereas 616 Mystique did on Rogue. And really, what kind of loyalty has Wolverine and X-Force inspired, given their mission statement or the way the team was shown interacting?

His relationship with Mystique in his universe is exaggerated most of the time, I think, but even so, I don't see him warming up to 616 Mystique at all, because she isn't his mother. He vaguely gets along with X-Force because he didn't know any of those members very well in his world. He killed Deadpool, and Weapon X turned psycho, Fantomex doesn't exist in AoA apparently, and...okay, I don't know about AoA Psylocke because I never read the 2005 series, but I've heard it was bullocks anyway.

Plus, he hasn't lost everything. He's lost a lot, but not everything. He still has the X-Men back home, and Darkholme doesn't want to stay in 616 because then he'd be just like Bobby and staying somewhere that's a lot easier than AoA. He isn't going to do that if he can help it. He still has morals. (They're just a bit bendy.)

I would love for him to interact with Mystique, but I don't see him leaving to join the Brotherhood because of its reputation. Sure, they look like his friends and family, but ultimately, they aren't. Same with Mystique--that isn't her son. He looks like him, but some other woman had the privilege of sort of raising him. It isn't really her place to step in and claim him. Her son is dead.
Actually I'm not sure if he even likes Sabretooth from his world. He didn't before, but I don't know how much 10 years has changed.

Also speaking of Sabretooth (kind of irrelevant) but I was kind of wondering why they didn't have Blink and him meet when they came to 616. That was way lame.

Anyway, yeah, just my thoughts on that. I really would love to see Darkholme and Mystique interact, though; but the way this fight is looking, I don't think they'll have much time to talk.
And I think Darkholme probably will stay on X-Force....because he really has no where else to go.
Top

So that last issue was uh... quite the cliffhanger.

Any thoughts on where this is going?

I personally see Darkholme making an excellent save here, stopping Deadpool at the last second.
My hope is that, at some point, Remender gives Darkholme a moment to shine before he (Remender) is sent packing and has to go to real Marvel titles with all these upcoming changes.

If anyone can swoop in for a last second save, it is Darkholme moreso than any other character, at least on this team...
For funny tweets from NIGHTCRAWLER, follow my humor account http://www.twitter.com/fuzzybluejerk and spread it around to your comic friends!
Top

Am I the only one super confused how Wade even got down there, though? I mean, Evan is under water, in basically a vault. How would Wade know he's even there?
Part of me thinks it's a mind trick by the Shadow King and Wade just went off to take a piss or something. Because really, how would Wade even find out where Evan is without say, Sabretooth catching his scent?
I dunno man, it seems fishy to me.

EDIT: Check out the preview for 32! It might be -- but everyone on that team is capable of getting down there, near undetected. Hence why they are on that team.

I'd say Wade is probably #3 for most likely to get down there undetected. #1 is Psylocke, #2 is Darkholme. For me that puts Logan at #4 based on experience alone, and I don't know much about EVA but from what I can tell, she can probably do quiet as well or unwell as she needs to, depending on the situation.

I actually hope it is a silent page. Dialogue might ruin the simplicity of the encounter.

And I think it is very possible for Deadpool to have made his way in. He is good at his job, and his job is KiLLiN
For funny tweets from NIGHTCRAWLER, follow my humor account http://www.twitter.com/fuzzybluejerk and spread it around to your comic friends!
Top

No what I mean is
it's underwater
how does one get in to that without either teleporting or letting in a bunch of water. And Wade hasn't had the teleporting device throughout UXF so...
idek

But as for the encounter between the Darkholmes, I'm certain there will be some sort of dialogue. The body language in the second and third panels indicate some form of speech. But I dunno, I'd sort of hate if there wasn't? Because I'd like to know what they make of each other. Especially Raven. Plus I want to see if Kurt will give us any insight as to what's happened to AoA Mystique, since she hasn't appeared in the AoA title yet.
Top

Well, they beat around the Underwater Base thing pretty good.

Anyone else a little irked out but still supremely intrigued by the ending of that issue? 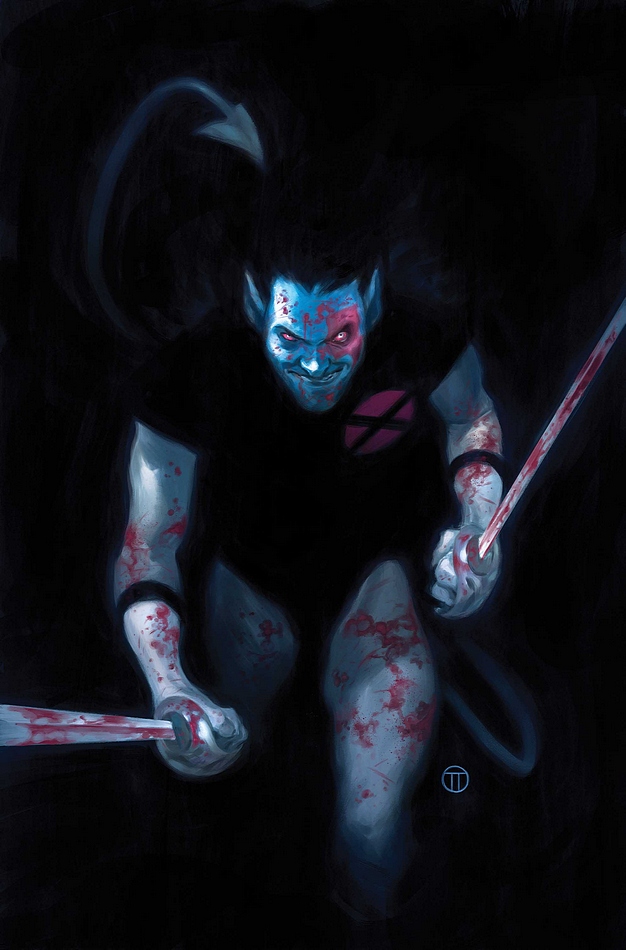 Yep. To be honest though, I'd rather see the character go full Brotherhood and be shown with Mystique in the future rather than the thing get turned around and Remender make him into another Nightcrawler who dies to impact Wolverine's character development. As in, being a traitor was a ruse and Kurt rushes in to save the team and gets himself killed.

Darkholme isn't in any of Marvel NOW solicits, so he's either dead, a villain or sent back to AoA (aka comic limbo).
Top

Or they want you to be skeptical and curious to see where he'll appear.

In all honesty, I think it's not unrealistic to assume Darkholme dies (which is bull shit, by the way) but I really think where this is going is Logan/Darkholme development. I see Logan stopping him from killing Blob to set an example for Evan *and* his own son, an maybe even Darkholme stops himself after Logan holds back from killing them.

Mystique stops him because seeing her son kill is too much for her, being her actual son would have never done that.
Top
Post Reply
172 posts