Famed comics writer Mark Waid has an undeniable trait of rejuvenating characters. From picking up the story of Superman, long overdue for a rehaul, and delivering a story about the man rather than the super, all the way to re-inventing the wheel in terms of how a Hulk story is told, Waid has singlehandedly revolutionized almost every character or team in the Big-2 (that’s DC and Marvel for anyone not with me, yet). Waid has worked on The Flash, Justice League, Captain America, and many others bringing life and vitality to what are often seen as stagnant storylines. This ability to resuscitate characters is what brought Waid to the slowly sinking ship that was Marvel’s Man Without Fear: Daredevil.

Daredevil comes to life in Waid’s series with artists who have the class and tact to tell the sort of story Waid strives for. His characters are always old school; that is silver-age and lovable. There’s always the dramatic and brutal wrench Waid throws at his characters in order to reveal a new development for the title, which happens repeatedly in this series. Backstories and secret truths result in actual heartbreak and the Marvel Editors (in this case Ellie Pyle and Steve Wacker) are always willing to find artists to bridge the gap of the macabre that Daredevil has been known for in the last decade, and the history of free-falling fun-loving for the decades before that. Artists such as Chris Samnee, Marcos Martin, Paolo and Joe Rivera, have each added to the series a flashy, but simple, appeal to the character and his panels. Most interesting is the way the artists illustrate the radar sense that Matt Murdock (Daredevil, for newbies) uses, as a result of being blinded by a radioactive chemical that enhanced his other four senses. The cover of “Daredevil” volume one is a perfect depiction of how the Daredevil’s radar sense helps him see the world we live and operate in with unique “eyes,” so to speak. 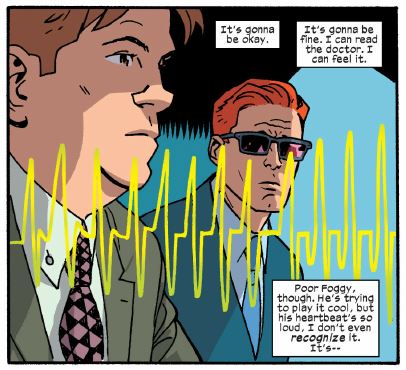 The tone of the series is back-to-basics, which is appreciated. Daredevil, for so long, has been resistant to change. The stories told by Ed Brubaker and Brian M. Bendis (two of Marvel’s most acclaimed writers) were new and twisted, adding a level of darkness and Catholic guilt that many writers had toyed with but never delved into. While that bag-of-cats is always a good read, it can sometimes come of as a lampoon act towards the DC books (which are notoriously darker, i.e. Batman). The seminal work done before this for the character of Daredevil has given Waid a perfect opportunity to start fresh and begin the character anew.

Though the series is minimalist in art it is explosive in detailed storytelling and easily one of Marvel’s best books on the shelves. The last issue of the series ran last month with issue number #36, though historically the series is well over number 600 at this point since it’s initial introduction of the first series back in 1964. The rebooted title, with the same creative team including Samnee and Waid, returns with Daredevil in the All-New Marvel Now! series of comics being released between February and April. Expect issue number one of the new Daredevil story to hit comic shops everywhere this Wednesday (Mar. 19)!